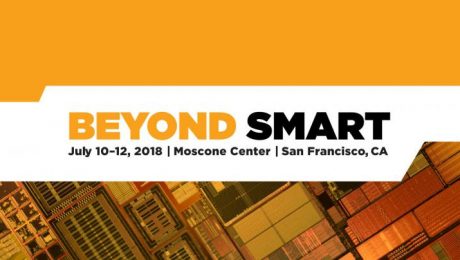 It was a banner 2017 for the semiconductor industry, growing to a $412 billion global business. However, in today’s disruptive technology landscape, industry leaders cannot rest on the laurels of last year’s financial success. To continue thriving in a world that’s rapidly moving beyond smart, SEMICON West, hosted in San Francisco, Calif., July 10-12, brought together the major players in all things semiconductors.

Pickering Electronics, the reed relay company that has pioneered miniaturization and high performance for more than 50 years, was amid the hundreds of exhibitors promoting insight, innovation, and intelligence. At SEMICON West 2018, their Series 124 made its appearance—the industry’s smallest reed relay.

How did Pickering Electronics achieve such a feat? Pickering’s Technical Director Graham Dale describes the company’s evolutionary process to ECN, straight from the busy exhibitor conference hall in San Francisco.

“We’ve been manufacturing reed relays since 1968, I’ve personally been with the company for almost 44 years, and we have a sister company that’s been going for around 30 years making switching systems. There is a very strong synergy between the two companies.”

“So a big part of the cost of switching systems is, of course, the boards, connectors, and racks. If you can improve the functionality because of a smaller component, it’s worthwhile. That has been the catalyst for smaller and smaller parts. We’ve always been making smaller relays, and we’ve always been quite inventive. Unfortunately, many of our other products have been copied by competitors. We’ve set new standards over the years, and these are our latest ones, so we try to keep staying a few steps ahead.”

The Series 124: Design, Components, and Applications

The product sports sputtered ruthenium reed switches with a 5 watt, 0.5 amp rating. Although these switches were used in other Pickering devices such as the Series 111, 111P, and 117, they boast a different feature—vertical orientation within the package. This design choice, according to Dale, grants the Series 124 with the highest packing density available.

“Rather than the reed switch being horizontal within the package, the switch is actually vertical in the package. We’ve optimized the pinout such that the pins are on a 2-mm square pitch, so it is possible to use some proprietary connectors if you do want to socket them. This is not always a good idea though because you do lose some contact resistance integrity but we appreciate that some users may wish to do this for ease of replacement in the event of damage, so we’ve made it compatible with some standard sockets. It’s quite an optimum pin configuration, you know, as it allows tracks between pads on PC boards. At the moment, at the current state of play, that’s about as small as we can get.”

Measuring just 9.5 mm high, it falls under Pickering’s new line of ultra-high density 4 mm2 TM reed relays, which take up a minimum board area of 4 mm x 4 mm. Working on such a small scale, Dale discusses the idea of approaching size limitations:

“We are limited by the sizes of the reed switch, the coils, etc. One thing we did pioneer from relays is that we dispense with the more usual bobbin on which the coil is wound. The coil is wound on a mandrel, and it’s wound so the wire, as well as the insulation, have got an adhesive on it, which melts under heat. So the coil is a solid, standalone lump without having a plastic bobbin. You can get probably sometimes twice the winding window because you’re dispensing with that plastic work—that has enabled us to make smaller parts.”

“We also have internally, in our relays, a mu-metal magnetic screen, which most don’t have. They’re a magnetic device, of course, so the fields from one can affect the adjacent parts. So, by having that screen, it avoids those problems, which is something that we pioneered also. We have been quite creative in these things over the years, and unfortunately they tend to be copied.” 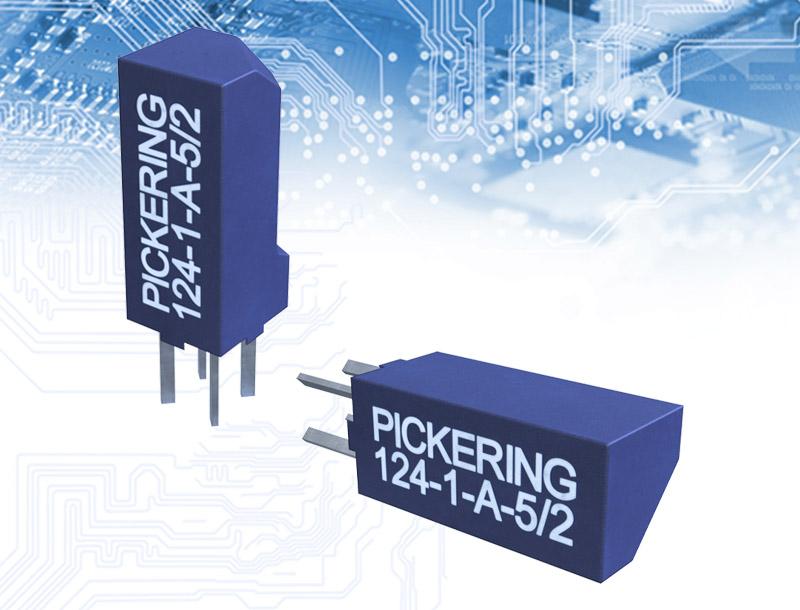 High-density applications, such as automated test equipment (ATE) and semiconductor switching matrices or multiplexers, can benefit from this technology. In addition, thanks to its 80-µs operating time, high-speed test systems can also utilize the Series 124, explains Dale.

“Mostly where people want a high packing density in a high pin count semiconductor test—that’s our biggest area. Since they are small, they’re also quite fast. The mass of the reed switch is small, so they’ll operate quickly, typically 80 µs. It’s pretty quick compared to the larger ones of  a few years ago, and of course people want speed.”

Living up to the conference’s message of staying ahead of the technology curve, Pickering’s Series 124 showed considerable improvement from its Series 120 predecessor, which was released at last year’s event. Measuring 15.5 mm in height, the 2017 reed relay is rated at 20 watts, 1.0 amps, and is the only other product part of the ultra-high density 4 mm2 TM line.

According to Dale, the public’s reaction to the Series 124 was trending toward the positive on that sunny San Francisco afternoon. 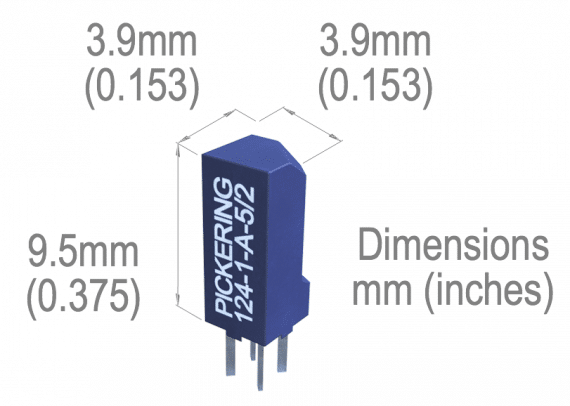 SEMICON West, the premiere event for the semiconductor industry, promoted the beyond smart idea to push the already fast pace of tech innovation. With a sea of exhibitors blanketing the San Francisco Moscone Center, Dale leaves us with these key Series 124 takeaways:

“It has the smallest board area, it’s magnetically screened—it has all the features we’ve evolved over the years and we’ve combined them now into the smallest reed relay that there is.”

You can view the original article here >> 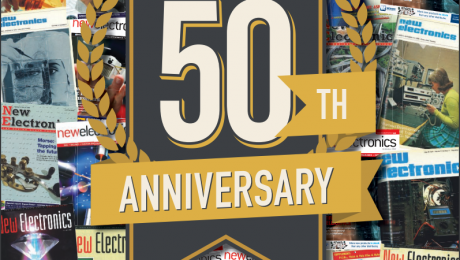 “Fifty years of designing, manufacturing and distributing reed relays means that we have a very good understanding of the product we are selling and consider ourselves to be the leaders in reed relay technology,” said Graham Dale, technical director at Pickering Electronics.

“Since 1968, we have gradually evolved our reed relays from very large, relatively crude parts to the small, ultra-reliable parts we have today. Production methods and quality systems have improved a great deal over that time, and costs have been radically reduced.

“When I started designing reed relays in the late 1970s some were saying that these electromechanical devices would have a limited lifetime. Instead, the market for high-quality reed relays has increased into areas that were inconceivable in those days.” 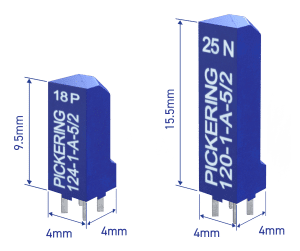 Pickering has now become renowned for designing reed relays for high-density applications. Just last year the company released what is claimed to be the world’s smallest footprint reed relay — the Series 120 4 mm2 — switching up to 1 A while stacking on a 4 x 4 mm pitch. And right now, a lower profile version, Series 124 on the same footprint but measuring just 9.5mm high, is being introduced.

The Pickering Group now comprises two privately owned companies: Pickering Electronics, a specialist in reed relay design and manufacture, and Pickering Interfaces, which since 1988 has been designing and manufacturing modular signal switching and simulation for switching systems. The group employs over 380 people worldwide, with manufacturing facilities in the Czech Republic along with additional representation in countries throughout the Americas, Europe, Asia and Australasia.

You can view the original article here>>. 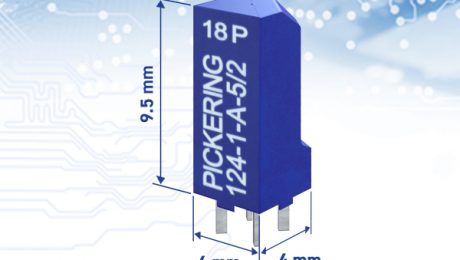 Pickering Electronics are pleased to announce that the new Series 124 4mm range of ultra-high-density reed relays are now available.

These new relays are the lowest profile reed relay on the 4 x 4mm footprint, measuring just 9.5mm high. Devices are currently available in 1 Form A (energize to make) with options of 3 or 5 volt coils.

The relays boast very fast operate times, typically 80µs, making them ideal for high speed test systems, and due to the incredibly small size they are also suitable for very high-density applications such as A.T.E. and Semiconductor switching matrices or multiplexers.

These single pole relays are the second series to be launched within Pickering’s new ultra-high density 4mm product line – Series 120 devices were released at Semicon West last year, rated up to a 1.0 Amp at 20 Watts, but with a higher profile height of 15.5mm.

The device has pins on a 2mm square pitch. There are suitable connectors available from some manufacturers, both SMD and Through Hole, that will allow these relays to be stacked in either a row or in a matrix on a 4mm pitch. 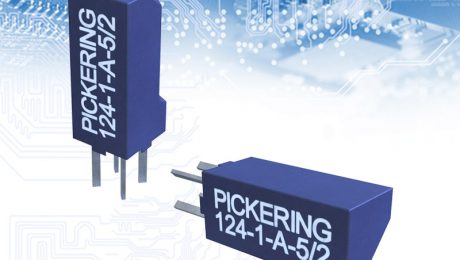 Pickering Electronics, the reed relay company which has pioneered miniaturisation and high performance for over 50 years, has announced industry’s smallest reed relay. The Series 124 is part of Pickering’s new ultra-high density 4mm2 TM product line, which takes up the minimum board area of only 4mm x 4mm, allowing the highest packing density possible. Series 124 relays are also the lowest profile on the 4 x 4mm footprint, measuring just 9.5mm high.  Devices are currently available in 1 Form A (energize to make) with options of 3 or 5 volt coils.

Series 124 reed relays feature a sputtered ruthenium switch rated at 5 watts, 0.5 amps. These are the same reed switches as used in the long-established Pickering Series 111, 111P and 117 but are orientated vertically within the package, facilitating such high density.

The relays boast very fast operate times, typically 80µs, making them ideal for high speed test systems, and due to the incredibly small size they are also suitable for very high-density applications such as A.T.E. and Semiconductor switching matrices or multiplexers.

These single pole relays are the second series to be launched within Pickering’s new ultra-high-density product line – Series 120 devices were released at Semicon West last year, rated up to a 1.0 Amp at 20 Watts, but with a higher profile height of 15.5mm.

You can view the original article here>>.